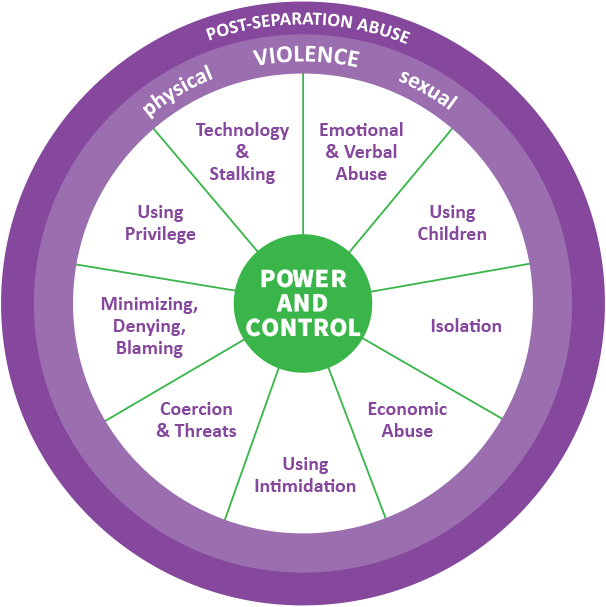 The Domestic Violence Power and Control Wheel was developed by survivors to outline their shared experiences in abusive relationships. Though the wheel does not include every tactic or behavior used by abusers to gain power and control, it is inclusive of many survivors’ experiences. Physical abuse is only one part of a pattern of abusive behaviors. Abusers will use physical, sexual, social and emotional abuse to terrorize, intimidate, and manipulate their partners.

We share this wheel to help educate everyone on the complicated dynamics of domestic violence. It helps victims understand that they are not alone in what they are experiencing, and that these tactics of maintaining power and control are common to abusers. It also helps illustrate the complexity of domestic violence and the underling pressures that can make it so difficult and dangerous for a survivor to leave an abusive relationship.

Click different areas of the wheel to learn more.

It wasn’t unusual for Abby to get over 100 text messages in just a few hours from her abusive ex-boyfriend. He would demand that she reply immediately. If she didn’t, he accused her of cheating on him, that she was with another man. He would call her office all the time, and if he couldn’t get her on the phone, he’d show up. Abby had to constantly be available or else the abuse would escalate when she got home.

Leo’s wife insisted that she have access to all his emails and text messages. When she would get home from work, Leo had to hand over his phone so she could read all his texts and emails. She would check all sent and deleted folders too. Sometimes, she would even double check their bill to make sure he wasn’t hiding something.

Jasmyn’s husband installed a GPS monitor in her car and downloaded a tracking app on her phone. He always knew where she was and, if she left the house, he would question her incessantly about where she went, who she saw and talked to, on and on.

Even though she had been married for 10 years, Rose Marita’s husband refused to file the paperwork for her to get citizenship. He also threatened to call ICE on her and have her deported when they fought. She felt trapped because she didn’t know the systems, had no money, and didn’t know about any protections she had as a survivor.

When she started dating her ex-boyfriend, Whitney liked that he was old fashioned. He always opened the door for her, paid for dinner, and would drive them everywhere. But, as they got more serious, he demanded she quit her job because women are supposed to be homemakers. She was expected to cook and do all the housework. He even dictated what she wore, and almost always insisted she wear dresses and high heels because that’s what he found attractive.

Making light of the abuse and not taking concerns about it seriously. Saying you caused the abuse to happen or saying the abuse didn't happen. Shifting responsibility for behavior.

Tiffany's ex-boyfriend had an excuse every time he yelled at her or hit her. Every one of them had a common theme - it was always her fault. Maybe he had a hard day at work, and she wasn't supportive enough. Or dinner wasn't what he wanted. Or he thought Tiffany flirted with a guy at the bar. She felt like she could never do anything right; that no matter what, she was to blame for his behavior.

Whenever Joslyn tried to talk to her partner about his behavior, or the way he treated her, he would say he didn’t remember ever doing it. Or, he would tell her she was being too sensitive and couldn’t take a joke. Even when she confronted him about his physical abuse, he told her he was just joking around. He never took her concerns seriously, and tried to make it seem like it wasn’t a big deal.

Making and/or carrying out threats to do something to harm. Threatening to leave, commit suicide, or report to welfare. Making partner drop charges or do illegal acts.

Derek wanted to leave his husband, but each time told him he was going, his husband would tell Derek he’d kill himself. Sometimes, he would even get his gun and hold it to his own head. He told him, he would be blamed and would be arrested for murder.

Angelina’s ex was always making threats. He would often tell her if she left, he’d kill her and her children. Or, he would threaten to hurt her family when she would break his rules about where she could go or who she could talk to.

When Liu’s husband was angry, he would stand over her or throw dishes at her. One time, they were fighting in their bedroom, and he started punching the lid of their hamper. He did it repeatedly, until it, and the entire hamper was ruined. While he never hit Liu, he would be violent and break things around her. She was scared of him.

Justina loved her cat and he brought her so much joy. Her girlfriend knew this, and whenever they would fight, she would threaten to hurt Justina’s cat. Even when they weren’t fighting, her girlfriend would make comments about different ways the cat could die.

Preventing you from getting or keeping a job. Making you ask for money and/or giving you an allowance. Most assets in your partner’s name. Being forced to take out loans or sign leases.

Brandy was a waitress and loved her job. When she started dating her boyfriend, he would come by on her lunch break to spend time with her. But, overtime, he started showing up during her shifts and demand that she stop working to talk to him. Or he would call the restaurant multiple times to talk to her. When she asked him to stop, he accused her of cheating on him. She was written up at work, and eventually, was fired because customers were complaining. No matter what job she got, she would eventually lost it or have to quit because of her boyfriend’s incessant calling and showing up.

Alena wasn’t allowed to work, but was expected to do all the housework and errands. But, when she had to go grocery shopping or pick up other supplies, she had to justify each item she wanted to purchase. After doing that, her husband would give her cash and demand a receipt and exact change after each trip. Alena never had her own money and didn’t have access to the bank accounts.

Relocating you. Controlling what is done, who is seen, spoke to, and what is read. Limits outside involvement. Uses jealousy to justify actions.

After getting married, Kyle’s wife decided they should move across the country to “start their new lives fresh.” Once they got to their new home, she changed her phone number and disconnected his. She wouldn’t let him get a new job and he couldn’t leave the house without her. Kyle found himself isolated from others, feeling totally alone.

Roxanne was very close with her family and saw them multiple times a week. At first, when she got together with her boyfriend, he seemed to love them. But, slowly, he started complaining every time they had to go see them, and eventually, they would fight before and after any visit. To avoid the stress, Roxanne started seeing her family less. When they would confront her about it, she would get upset and her boyfriend would tell her that they clearly didn’t care about her, further deteriorating her relationships with her family. Eventually, she rarely saw them and, when they did, not only did she fight with her boyfriend about it, but with her family too about how often she came around.

No matter how bad things got with her husband, Kyanna never felt like she could leave. He always told her that if she left, she’d never see the children again. He would call her names in front of the kids and would encourage them to call her the same names instead of mom. When they would argue, he would get the kids to agree with him that he was right. He was slowly turning them against her.

Every time Georgia’s ex-husband dropped of their kids to her, he would throw all the trash in his car out on her lawn. He was often late too, both on pick-up days and drop off days. He said awful things about her to the kids. When she remarried and had another baby, he told the kids that she had told him she no longer wanted to spend as much time with them now that she had a new family.

Nahla’s husband called her names regularly. He almost never used her name, and often said she was stupid or worthless. He yelled and screamed at Nahla daily and did everything he could to make her feel small.

When Lydia and her girlfriend went out with friends, inevitably her girlfriend would humiliate her in front of everyone. She would share something embarrassing Lydia had said, or would tell someone there that Lydia had once said she didn’t like them. Lydia would beg her girlfriend not to do this, and she would promise not to do it again. But, inevitably, the next time they were with others, it would happen again.

Donna thought she was going crazy. It seemed like she could never get any of her kitchen appliances to work. What she later found out, was that her ex-husband was taking away a small piece of an appliance so that it wouldn’t work well. When she couldn’t get it to work, he’d always be able to get it to work. But, he’d take the part away again, and then she’s be unsuccessful. This happened over and over and Donna began to not trust herself.

The first time Shana’s boyfriend punched her, she couldn’t believe it. He apologized right away and said it would never happen again. But, he routinely hit, punched, and bit her. She often had bruises on her body, and even had to go to the hospital for a broken arm.

For Rosana and her husband, sex was always on his terms. She could never say no; he would force her anyway.

Liliana’s ex-boyfriend never hit her, but he would often shove her into walls or push her down and pin her to the bed. No matter how hard she would struggle, he wouldn’t let her go. He always told her to remember that he was stronger and she had to do what he said.

Any kind of abuse that continues after the relationship has ended. Stalking and harassment. Using the legal system.

After Regina left her husband, he filed numerous continuances in family court for their custody case. Even after a decision was made, he would file appeals. To amend the agreement, to accuse her of neglect, or saying she didn’t follow the court orders. It seemed they were constantly in court. Regina paid out thousands in lawyer fees because he used the legal system to continue to abuse and harass her.

Dominique’s ex-boyfriend continued to text her incessantly after they broke up. Or he would call and leave messages, calling her names and threatening to hurt her. It didn’t matter if she ignored them, he still did it. She even got a new phone number, and he somehow got it and kept harassing her.